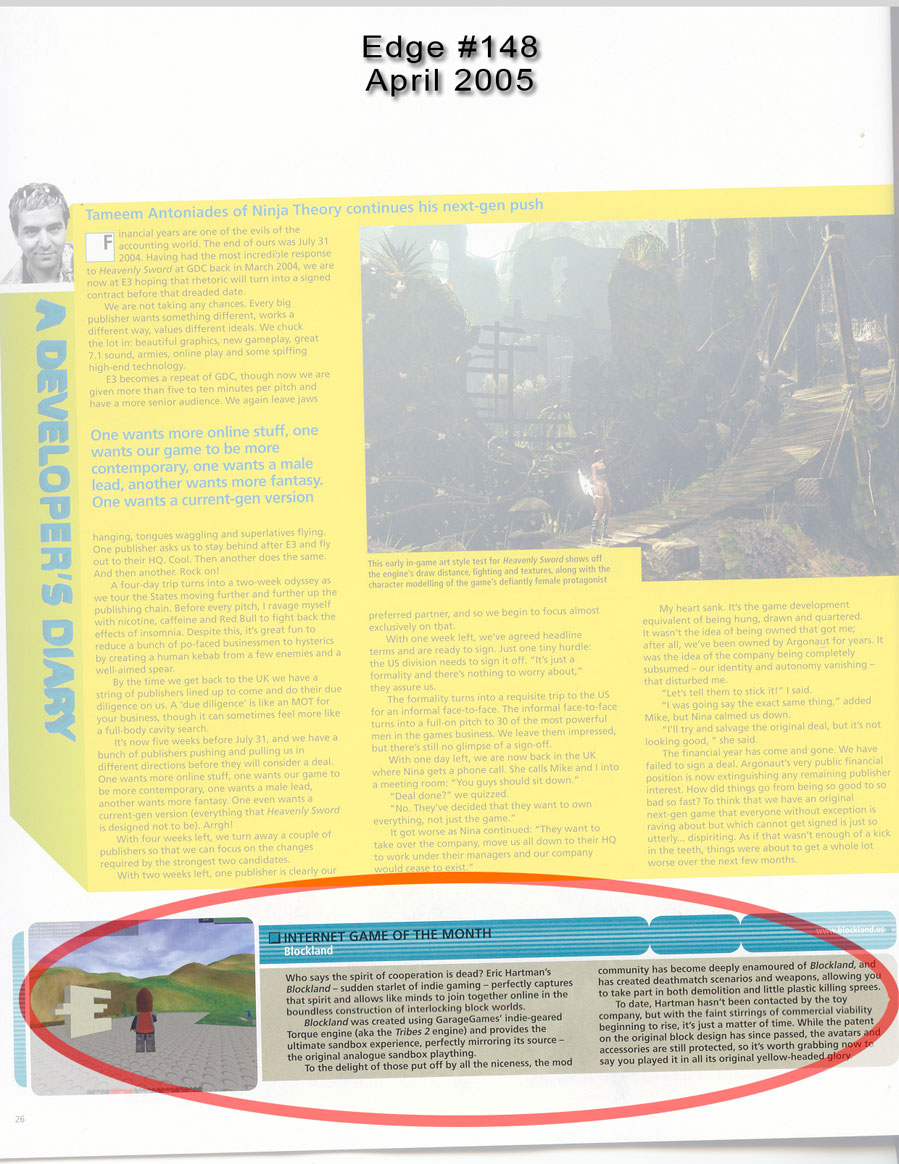 Yes, Blockland is a real game played by real people and was covered in real magazines. Please stop trying to delete the article from wikipedia.

Who says the spirit of cooperation is dead? Eric Hartman's Blockland - sudden starlet of indie gaming - perfectly captures that spirit and allows like mids to join together online in the boundless construction of interlocking block worlds.

To the delight of those put off by all the niceness, the mod community has become deeply enamoured of Blockland, and has created deathmatch scenarios and weapons, allowing you to take part in both demolition and little plastic killing sprees.

To date, Hartman hasn't been contacted by the toy company but with the faint stirrings of commercial viability beginning to rise, it's just a matter of time. While the patent on the original block design has since passed, the avatars and accessories are still protected, so it's worth grabbing now to say you played it in all it's original yellow-headed glory.

^ Haha! This is how I found Blockland; I remember reading EDGE on a plane to California (I live in the UK) on an Easter vacation. When I returned from the 3 week holiday I remembered those couple paragraphs and downloaded BL 1.002 I think. Weeks later everyone was talking about BL Mods which was the new thing. AiO came along, and RTB challenged them (Lonhaj) soon after. I then spent huge portions of almost all my free time on either blockland or AOT. I recall so much from AOT. The first time I got the gold hook, forming a gang called the penguins, shop roof glitch, the day I guessed purely by chance that your admin password was "vanilla"! I owe a lot of happy memories from my adolescence to you.
miked2011-01-03 16:09:27
That is nearly 6 years ago now... jesus christ. I was 15 when I read that Edge article. In fact I remember telling you I saw it in some thread (like "where did you find blockland?") on the forums. Now I'm about to graduate from university. My little brother plays Blockland retail at least once a week and he is now 12 - so he is going through it all again. It won't be the same though. Ah, nostalgia.

Hope you are keeping well Eric. I will buy you a pint if you ever drop by London.

Officially? No. The early versions of Blockland are no longer available officially, either here or on Blockland.us.

Unofficially? Yes, there are a few mirrors.
The most notable is the one on Blockland user Demian's website: http://blockland.dataorb.net/old.php