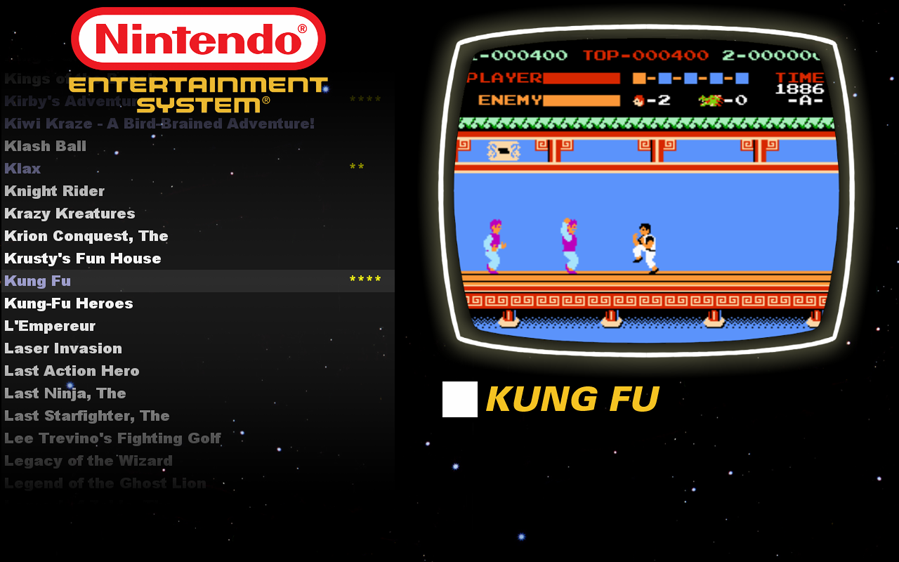 This is an emulator front end that I made called RomShelf. You can find out more here.

It is a program that successfully displays a list. A rare feat.

Comments
Bearchell2014-06-19 23:08:23
I am running ROMSHELF on a 64 bit OS by keeping the directory stored in my program files(x86). When I have entered in all the directories for the emulator and rom list I hit the "regenerate rom list" button and/or the "save settings" button and nothing happens in either instance. I have seen videos of people using romshelf and it immediately brings up a text box with how many roms were found, but when I try it doesn't work. Is this because I am using a 64 bit version of windows 7? It seems to operate fine until i try and regenerate the rom list.

Any help appreciated!
Badspot2014-06-23 03:21:26
I'm running 64 bit windows 7, so that definitely isn't it. It generates the rom list by executing a batch file that does some command line stuff. So if you don't have permissions to do that there will be a problem.
Adam2014-08-23 14:49:05
I just switched TVs on my HTPC and now romshelf not fitting to the screen correctly. the left side of my screen is cut off and makes it hard to read the names of the games. any thoughts on how i might fix that? thanks!
Badspot2014-08-23 17:02:37
Sounds like overscan. If it's an older projection tv you may be out of luck, but modern LCDs or plasmas should let you adjust that somewhere.
Romshelf2014-09-04 23:58:07
Check out my video about Romshelf if you need any help getting it working.
Romshelf2014-09-04 23:59:04
My tutorial can be found here for getting Romshelf up and running.
https://www.youtube.com/watch?v=L88k3AiICDs
suthorian2014-09-17 11:22:15
last night i found this frontend and i like it so far the only problem i got atm is that i generated a snes rom list but it decided to choose mario world 2 us version my father was playing on a europe version. when i remove the us version from rom folder and regenerate in romshelf it adds the us version in rom folder again is there anyway i can make romshelf use the eu rom ?
Badspot2014-09-18 08:17:19
If the euro version is the only version available it should use it. Romshelf can't move files around so just double check that you're looking at the right folder. Romshelf can scan subfolders however, so don't just move the US version to a subfolder of your rom folder.

Seriously though, you should use the US version since it runs at 60hz where the Euro version will be 50hz.
suthorian2014-09-18 11:36:43
the only reason im keeping the eu version of that game is for the progress in the game i got it fixxed by removing the db of romshelf already had subfolder disabled in config but it kept checking sub folder after removing the db and letting it search again for roms it got fixxed im keeping the us version in subfolder so can swap it when my father is done with the game thx for answering tough and thx for the work you've put in this frontend
Matt2014-10-11 05:51:35
Hey hey-

Running the program and everything is working great, (all emulators) EXCEPT for MAME- Followed the same steps to set up my MAME emulator and roms, but when I refresh it can never find them. Any suggestions?

Thanks
crissz2014-10-23 23:05:16
hey matt to make it easier your roms /emulators should be in the same DIR as romself launch command is .\emulators\MAME\MAMEUI32.exe launch parameters is "[ROMFILE]" mame exe game list is .\emulators\MAME\MAMEUI32.exe rom directory is .\roms\MAME if your roms still dont show try unchecking include subdirectories.
crissz2014-10-23 23:20:40
also some security suites will block the scanning of folders. i had a problem with comodo security blocking my scans even though i permitted it, it still would block romshelf from scanning the dir and it would never remember the settings for mameUI i had to keep allowing it every time. wouldint even show up in the allowed applications it was just an invisible space. so if you have any security on try disabling it if you still get issues
Brent2014-10-25 18:00:02
I've been having trouble getting the emulators to show up at well, I copy paste the file folder then \zsnesw.exe but nothing shows up when I try to refresh.
Jack2014-10-27 14:05:40
Hi, I would like to add a secondary Mame emulator, is it possible to add more systems ?
EagleTech2014-10-30 18:26:01
Hi, I am experimenting with running RomShelf from a usb drive. I would like to have everything self-contained on the flash drive for use on any PC I choose. Is there a way to setup wildcards "*" for the drive letter in the rom and emulator paths or is there any chance I could get assistance in making this happen? Thanks.
crissz2014-10-31 20:15:36
try Relative paths for the emulator and rom paths
EagleTech2014-11-05 20:20:43
How do I setup relative path for a usb flash drive? I realize in theory that should work, just not sure how to accomplish it... I need some constant relative path that will work in all windows systems and if possible linux systems... I really appreciate the assistance.Thanks.
htmlbbcoder2014-11-08 21:08:18
Try Finding the specific rom you want -htmlbbcoder
crissz2014-11-10 23:27:37
for the emulator settings in romshelf mine is .\emulators\snes9x\snes9x.exe the path for the roms is .\roms\SNES
run it and make sure it works before anything else. do the same with every emulator and rom path, for what ever system you have. i prefer to use mednafen for most of my emulation. anyways it runs off my USB drive which is drive J: with no problem, or any USB flash stick. i dont have linux so have no clue, if romshelf runs on linux i cant see there being a issue. you will have to test that :)
Zucot2015-01-16 17:29:18
Hello, I'm trying to configure romshelf but it refuses to recognize .7z mame roms.

If I rename the roms to .zip, it works. I have added 7z and .7z to the file extension field, but it doesn't work. No matter what I do the batch file that runs to build the rom database only includes *.zip. If I manually edit this file to look for *.7z the UI edits the batch file back to looking for *.zip when I click the search for roms button. Any help would be appreciated.
Zucot2015-01-16 17:30:46
Oops, I should add that Romshelf sees and adds .zip files, but Mame won't load them.
Q2015-01-26 22:54:07
I have an issue where Ill have the parent mame rom for say Teenage Mutant Ninja Turtles and the 2 player sub rom. Rom Shelf will only display the 4 player ROM, how can I get it to display the one that i want?
Gamer642015-05-20 03:37:27
Anyone who needs a Tutorial check this one out it's really good!