To fix this, I constructed a panel that would fit into the existing power supply hole with individually switched outlets for each of the internal components. 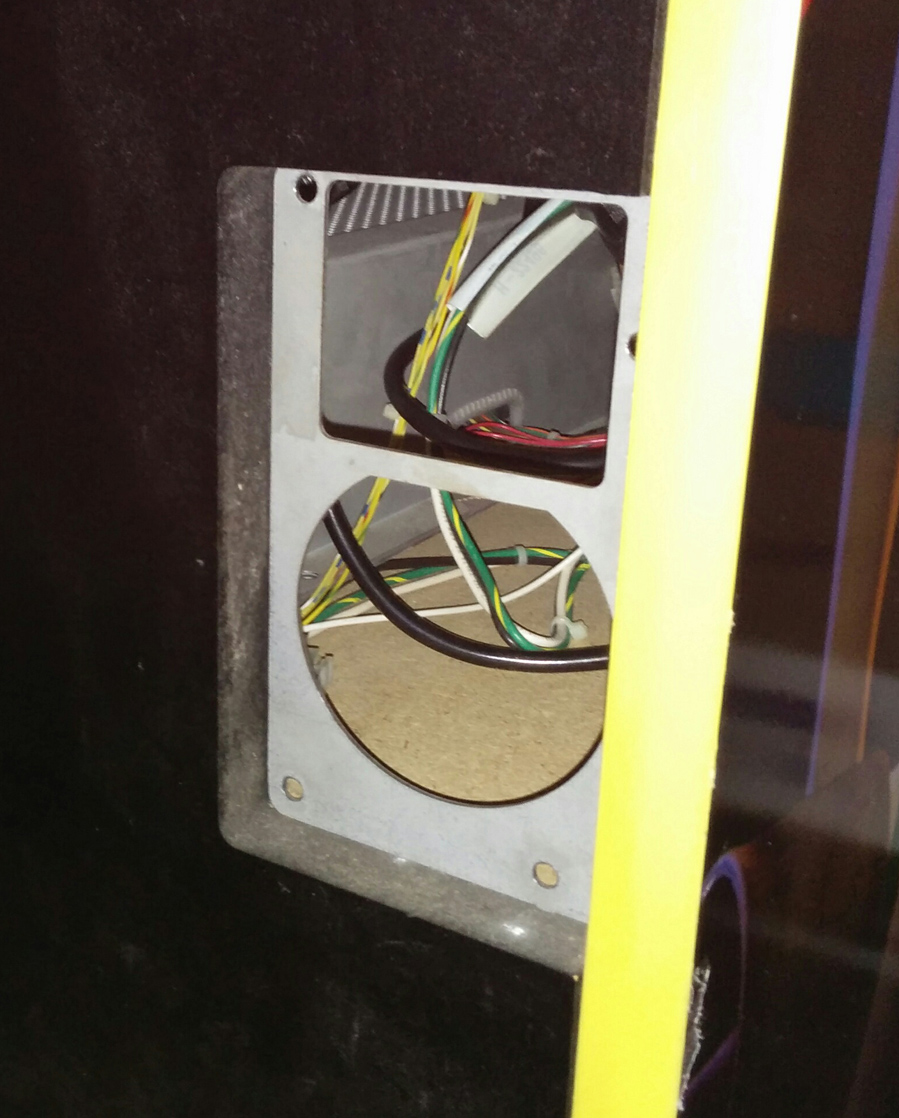 This is the existing hole in the back of the cabinet. The metal bracket originally held the power supply for the Gauntlet Dark Legacy system, which had a non-standard pass-through for the monitor and lights. 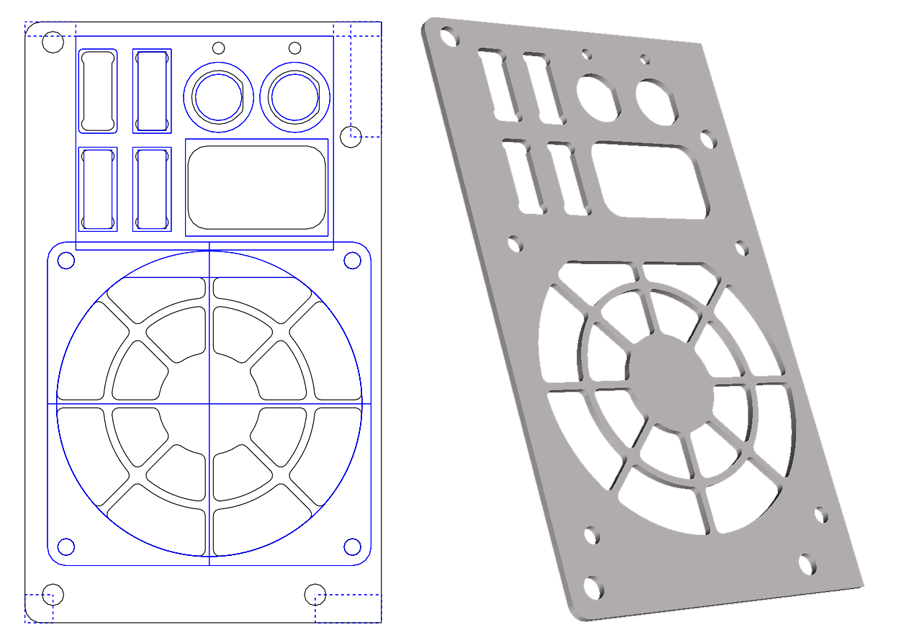 I designed this plate which will fit onto the power supply bracket. There are cutouts for power input, 4 switches, power and reset buttons for the pc, power and HDD LEDs, and an 80mm fan. 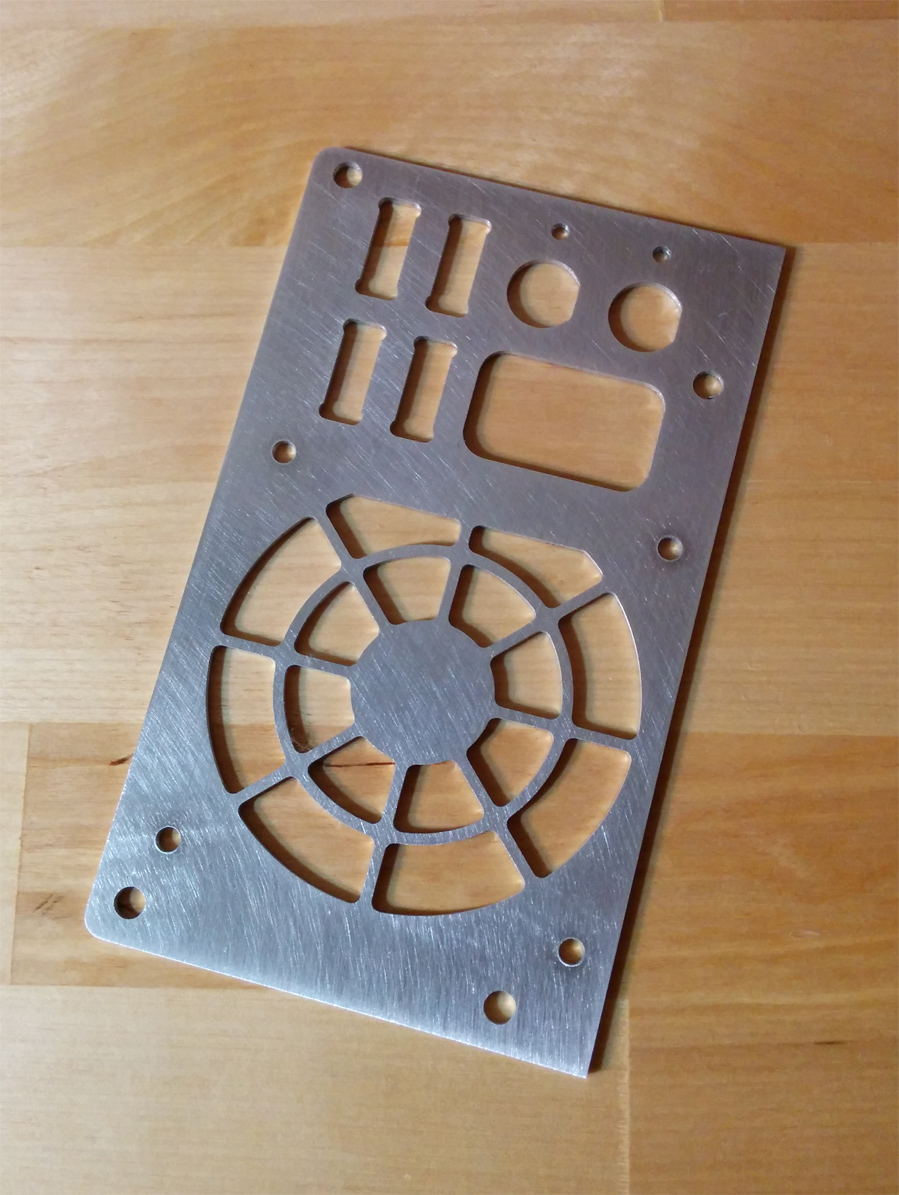 I machined the plate out of 2mm thick 6061 aluminum (leftover from my combat robot project), using the Bridgeport CNC milling machine at my local makerspace. 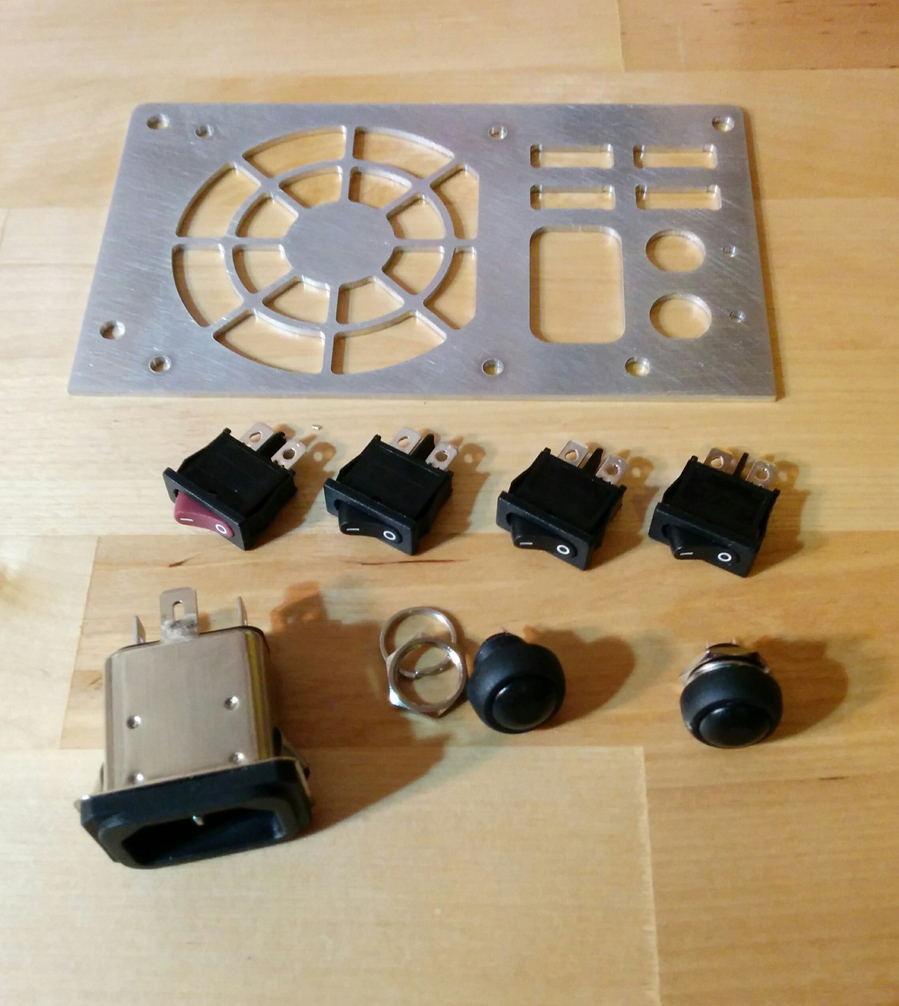 I ordered the switches from digikey, but I already had the power plug and pushbuttons from other projects. The power plug was an alternate part for a small formfactor DOS pc I'm working on and the buttons were extras from an electric RPM controller I built for the Bridgeport CNC. 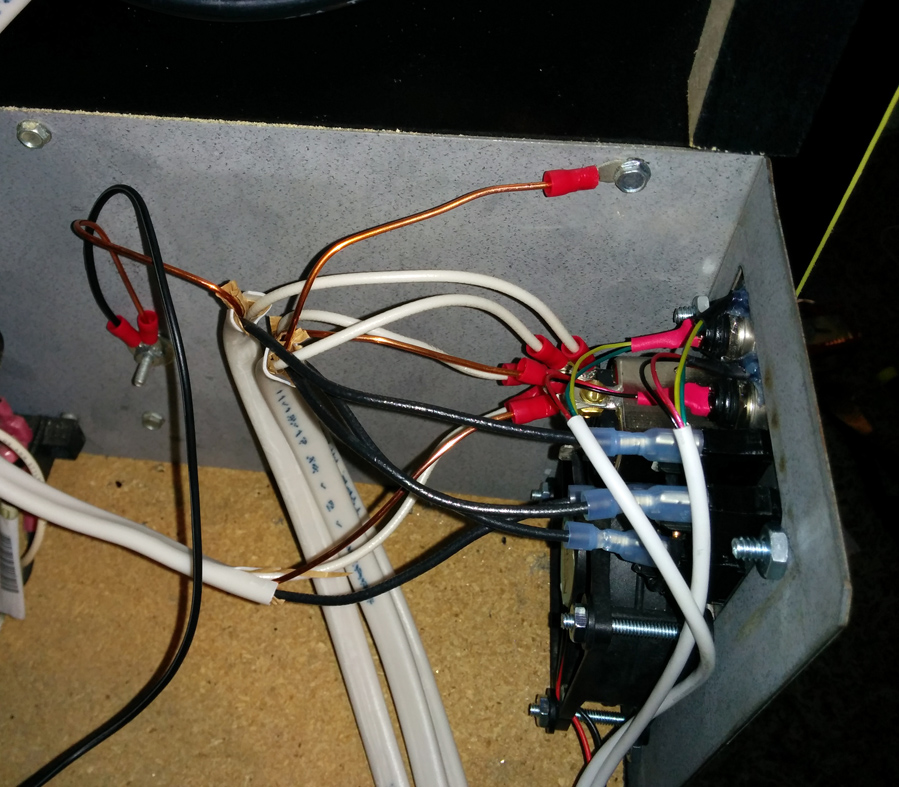 Here's the wiring for the panel. The live wires (black) each go to one of the switches via a blade connector, and the neutral (white) and grounding (bare copper) wires are connected via screw terminals. I attached some of the grouding wires to other places on the bracket just to make assembly easier - electrically it all goes to the same place.

I used up just about the last of my salvaged 90s imac phone cord collection to connect the buttons and LEDs to the emulation PC. 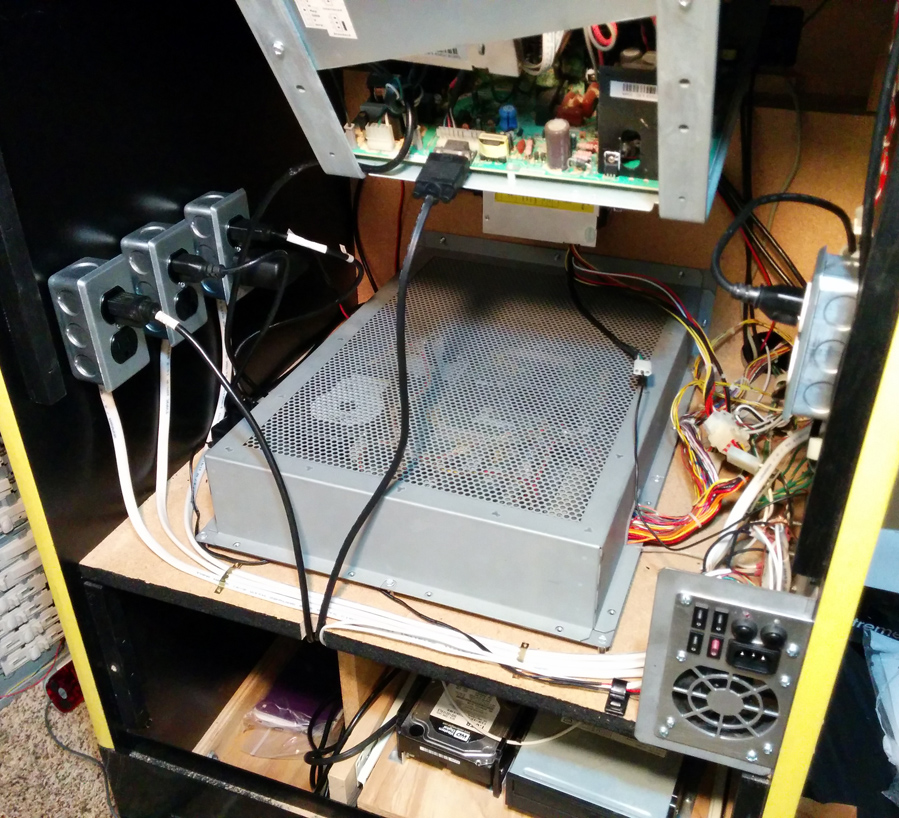 I installed regular-ass outlets in the machine, so you just plug things in. Each outlet is on a different switch, so you can turn the lights/audio, monitor, PC, and Gauntlet system on independently. The Gauntlet power supply is now mounted towards the front of the machine, partially visible here under the monitor.

Eventually I'd like to make it so you can play Gauntlet or MAME just by turning on the appropriate switches, but this would involve figuring out how to convert it from analog to digital controls and how to hook up one set of controls to two machines at the same time. I'm not super excited about diving into that mass of wires and potentially blowing up my keyboard encoder just so I can play a shitty 90s 3D game.

I have an AC adapter wired up to the intake fan (both salvaged parts from who knows what), but I left it unplugged because it was too loud. The PC has its own fan and it's a big enough space inside that it should be fine without it. 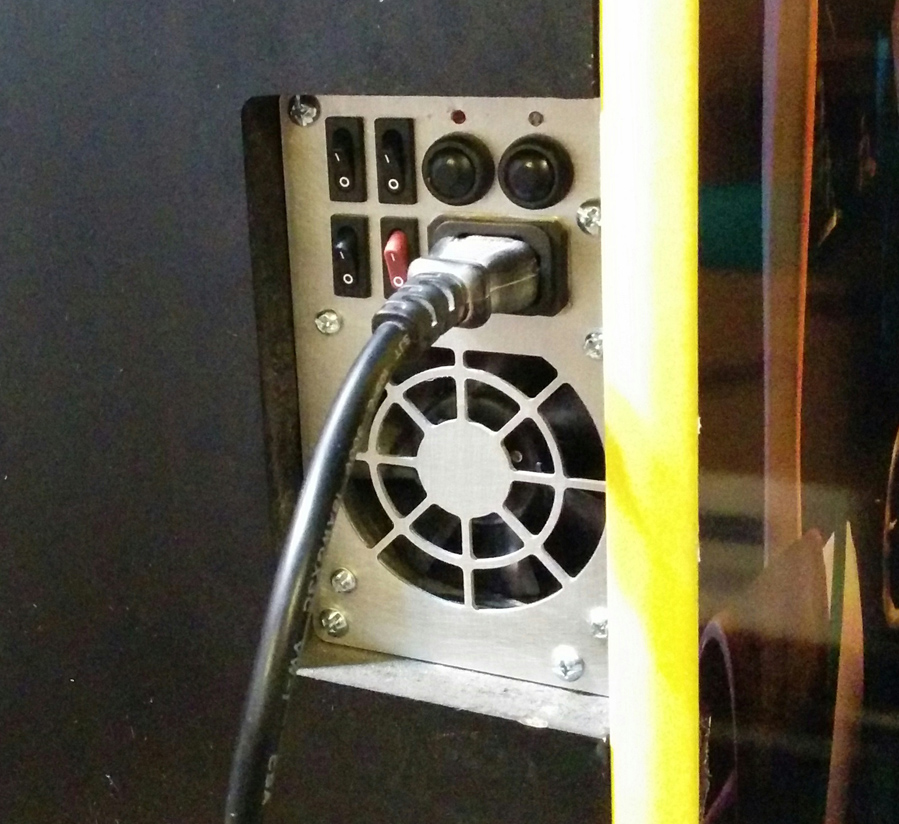 With the rear door back on, everything is very tidy. 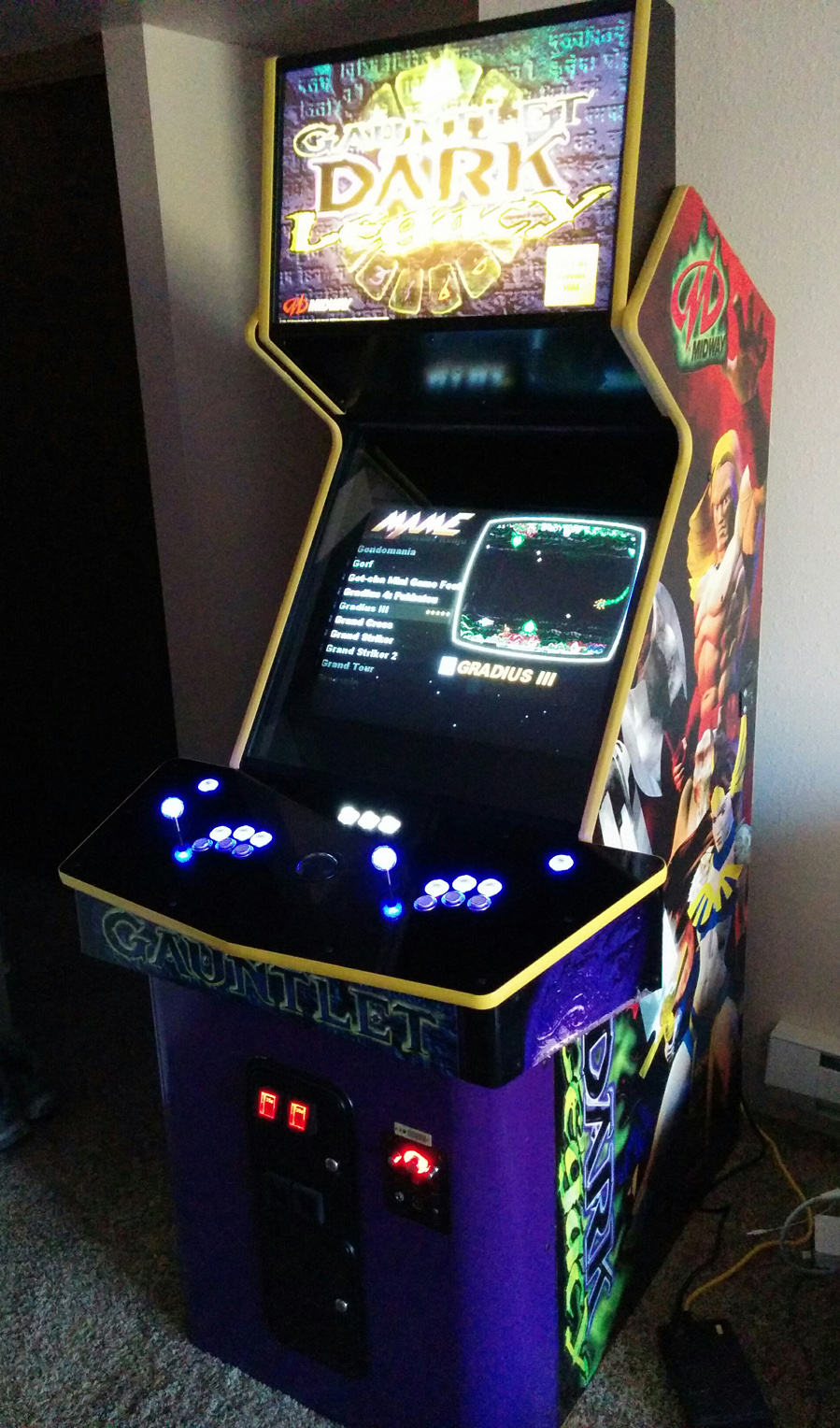