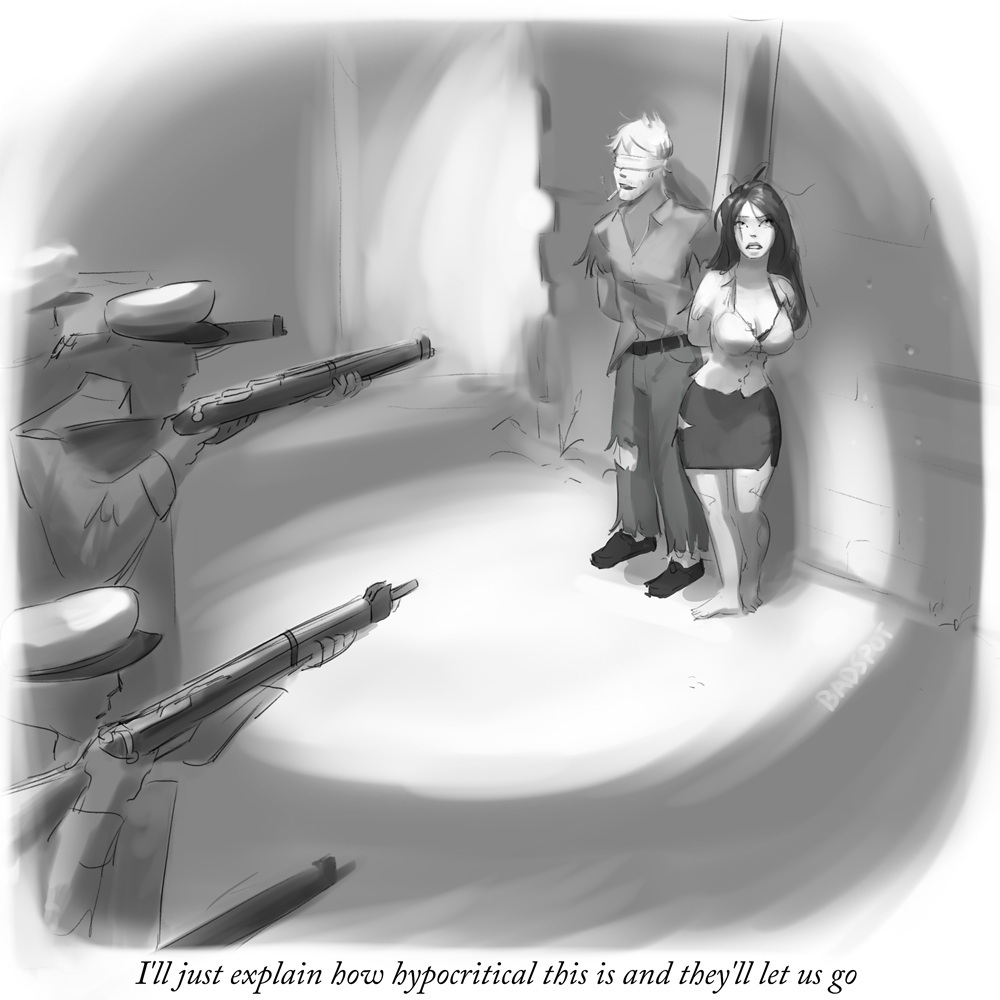 Can you believe these guys said they were against firing squads just last week? Wow, how embarrassing for them.

Transcript:
"I'll just explain how hypocritical this is and they'll let us go"

Comments
Ned2021-02-03 01:44:21
yep he has lost his marbles
Taus2021-02-03 14:36:17
Just sell Blockland to someone from the community so we can keep it alive and give it updates...
Blockhead00022021-02-19 21:35:35
Hello Badspot and commenters,
In response to that I have to give the opinion there is really not a need to update Blockland. It is disrespectful to not appreciate the game and demand Badspot to transfer ownership or update the game.
Blockland was originally aired on TV 2005, it's 2021. The game already got patched into a whole different game since. And it has the best features and GUI/Modding engine out of any of the 3D building games out there, basically allowing you to use Blockland as an engine to make a customized game.

Well, it is rude to demand Badspot update it (in an unrelated chat section) because the game is already done, it's a classic. That is like when they went back and made all of those CGI edits in Star Wars Episode 4, it only made the movie less nostalgic.

What would really help the game now is some advertising/incentives to get a bigger user base with more worlds hosted to explore and possibly attract more paid users, Epic Games Store and some others are doing this as rolling free key giveaways to get bigger user bases for PVP and multiplayer gameplay and it gets people talking about the game.
Mardalf2021-02-21 22:11:06
Blockland aired on tv in 2005... What?
Firing Squad Guy2021-02-22 01:53:06
If I tell Badspot to work on a game he refuses to work on, surely he'll work on it this time.
Blockhead00022021-02-23 02:28:10
Yes, that is true. Blockland when it was still a beta software was shown on Tech TV which later got changed to G4 and then later canceled, in 2005.
Now they are doing a reboot with Adam Sessler and Kevin P. bringing back G4 in 2021, and I checked to see there actually have STILL been Blockland updates in the past year and a 75% Steam sale already happened.

What is really hypocritical is this, Minecraft is the most popular building game, bought by a AAA studio, and 10 years later Minecraft is still 5 years BEHIND the technology of Blockland. And even with the insane sales and NASA-level budget of team working on the game, the technology of one guy's code for Blockland is still the best code, and nobody else has made a better multiplayer building game since it was finished out.
Re:Blockhead00022021-03-04 02:38:09
Roblox exhibits this even more. The game is worth several billions of dollars, yet only features marginally superior features such as allowing users to create multiple centrally hosted games each with their own servers. Although, the functionality of coding in Roblox and the amount of recycled assets throughout games is nauseatingly lazy.

If Blockland had half of the amount of users Roblox does, in the year 2021, we would most likely see far better innovation in gamemodes, server types, and a far more nurturing enviroment that isn't just motivated by E-money and investments.

Blockland is still a marvel in the building game genre, and carries itelf great for an indie game made in 2007.
Pussywhipped Satan2021-03-05 15:24:11
Please end the Blockland Forums already.
Blockhead2021-03-05 15:44:00
Badspot have you lost your marbles?
Hum2021-10-17 20:55:31
Dude i love the comics, i even bought your gsme years ago. Its nice to see you back every now and again.
Xurvoc2022-01-10 10:18:41
I would agree that its disrespectful to ask for an update if we asked for a lot. But all we need is a built in add-on system and a patch to the chat glitch. I 100% agree this game needs advertisement aswell but what better way to advertise the game then to update the game to bring back some life back? Old well known server host would see and update and host a server just in the excitement! And just the thought that Badspot is going to try and spark life back into this game would make the player base blow up. This game is near perfect, it could be a money printer if you play your cards right. You are right Blockhead0002 this game could be better than minecraft and roblox. But no one plays it anymore. But if you just add a built in mod menu fix the super minor glitches like the chat glitch that prevents you from seeing what you type and do some minor advertisement (Like paying some youtubers) Badspot would have his very own money printer. But he doesn't, I am not entirely sure why but its going to let one of the most slept on game in the world die. He is letting his golden goose die of starvation. Even If you advertise the game now as it is now chances are its just going to die again. Badspot if you read this, Just know if you ever want to become a millionaire just add an in-game mod menu that lets you add mods like blockland glass or RTB and fix some minor glitches pay some youtubers to check out the game a little while after the update and then your set.
BadspotsBraindead2022-01-14 17:41:44
groingy sploingy
baddpot make the game code pubicly avaible2022-05-30 21:58:20
badpsot
the satan minion2022-08-13 15:16:09
My man badspot subconsciously gave the nazi dudes the officer cap from blockland and they all got lee enfield