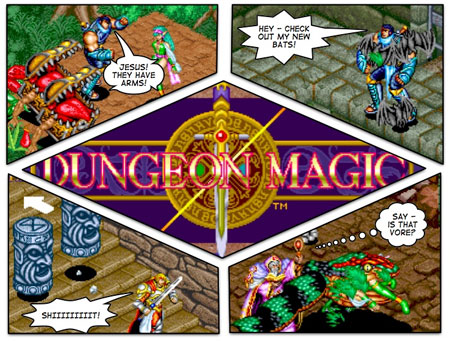 First and foremost, Dungeon Magic is a game about muscle bound dudes killing furries. You're barely out of the tavern when you're balls deep in dead furries. When you're not fighting furries, you're fighting palette-shifted ice furries. The rest of your time is spent dispatching Frog Men and smashing priceless artifacts.

We played through this game. It cost us like $12 in virtual quarters. We took 500+ screenshots and wrote two pages of crudely scrawled notes. And it all comes together now.

First off, don't be fooled by the title. This is really less Dungeon Magic and more Dungeon And. Dungeon And what? Dungeon And Dragons, of course. NERD ALERT! But seriously, this mostly means you just start out in a tavern, that being the only requirement of D&D as defined by Gygax back in 1974.1

After we finished killing our first furries, we discovered that some jackass booby-trapped nearly ever inanimate object in the game, including skeletons. Who booby-traps a skeleton? Especially a skeleton in a room with a gigantic killer spider queen?

The evil overlord, of course. He's named Venom, and he has a simple three-step plan when it comes to castles:

In summary: Smash a rock? Spear in the face. Smash a statue? Freezing smoke. Smash a "Wood Box"? VX Gas. The fun never ends. Of course, he couldn't booby-trap everything (he probably got confused between his huge boxes of treasure and his huge boxes of bombs), so sometimes you get gems and rareties by the handful.

Shortly after this, we discovered how to do our special attacks (press both buttons at once - just like every other brawler in the universe). But it wasn't until afterwards when looking through the screenshots that we noticed this part. The chick's special attack. Those wind elementals? Totally Naked. (Every game is thoroughly searched for nakedness.)

There were some other good points to this game. For instance, treasure whoring. There's no sweeter joy than stealing another player's hard-earned Chicken, Muscle Idol, or Mouse. When gigantic boxes of treasure fall from the sky and spring open, launching dozens of pixel-goodies into the world, every warm-blooded adventurer will be right there, often immediately under those chests, grabbing every random item they can.

That's the problem with today's games. Who wants abstract shit like points or a flag? No one! They're useless. Everyone wants treasure! Who wouldn't want some chicken or a big freakin' gem? That's why we fought the Nazis.

Speaking of items, Dungeon Magic supports pick-shit-up-and-carry-it-to-the-next-room technology. Which leads us to the story of Eric's Rock. Settle down class; time for a film strip:

Eric found a rock, and declared he would "smash the end boss but good with it." A 1 meter diameter granite rock, incidentally, would weigh 2,377 pounds. No idle threat! Sadly, he didn't make it.

Frog Men. Fucking Christ. So there we are, fighting the first miniboss, which is of course a giant snake. (The second miniboss was a giant snake with a different head.) And what should drop from the sky? Not just frogs. Not just men. Frog Men! Here you can see the Frog Men telling the wizard what they want for Christmas.

Because Dungeon Magic is isometric you never see the ceiling, but it must be full of holes. Consider all the crap that drops from it. Pudding, spears, fire, lightning, Frog Men, rocks that must be at least a meter in diameter, jelly. And in the same holes as the rocks, wolves!

Incidentally, "Pudding" isn't what is normally referred to by men as pudding. This is the bad kind of pudding. The hurty kind. It can move around on its own, and it's green. Always green. There's also Jelly, which is purple for some reason, and the ever-fearsome INVIN CIBLE, which is red. It's also, and this may come as a shock, invincible.

INVIN CIBLE is actually a mechanism for shuffling players along from room to room. Along with a small selection of other indestructible monsters, it's a gentle but disturbing nudge to encourage you not to dilly-dally. Dilly-dallying is fine in your console and PC titles, but in the arcade, time is money!