They're remaking Street Fighter for HD! This is actually pretty cool. But they're (probably) fucking up the sprites. Details after the break. Before the break, though, let me note that this is not a burn on the franchise as whole. This is just a burn on sweat-shop art houses and the art directors that don't demand more from them.

First, let's check out a comparison of the SNES, Arcade, and HD Remix versions of the sprite, below. All of these images have been scaled to the correct aspect ratio. For those trying this at home: the arcade version did not use square pixels, so you'll need to scale things from MAME vertically by 129% to get correct aspect ratio. For the SNES we believe we have correct scale; if anyone can get a picture of actual output on a NTSC TV, we'd be interested in comparing. 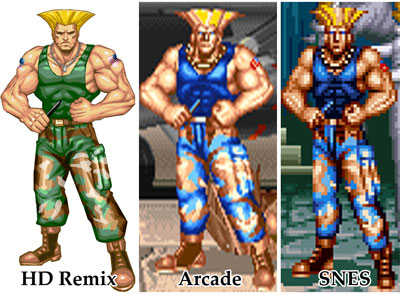 Note the varying levels of quality and definition amongst the sprites. SNES definitely has the most contrast, while the arcade version has more detail. The chronology here is interesting. Arcade Guile is incredibly wide. SNES Guile is a lot skinnier. Why did they make him skinnier? Is it a technical limitation with SNES sprites? Probably not; plenty of characters in the SNES version are a lot wider than Guile. Maybe they realized he looks a lot more like a human being when he's capable of fitting through a standard doorway.

Then there's HD Remix Guile, who is the same width as the already-wide Arcade Guile, but who has lots of other interesting problems. Which leads us to our next image, the anatomy of a frighteningly huge man:

Pay particular attention to the muscles on this dude's forearms (highlighted in red) and around his wrists and hands. Got that shape firmly in your head? Good - now let's talk about Guile's anatomy, which is even more amazing than this guy's. Remember, the pixelated Guile is the original Arcade sprite. The other Guile, the HD Remix one with the bizarre proportions, is the one that they paid extra money for, and that didn't fix any of the original problems. You probably want to click here to view the comparison image at full size. What are some of those new changes?

Are we excited about the new HD Street Fighter? We sure are. It should be a great chance to relive old times, and remind yourselves of how the games you played as a child aren't as good as you remembered them. But we hope they take the time to do the art right.